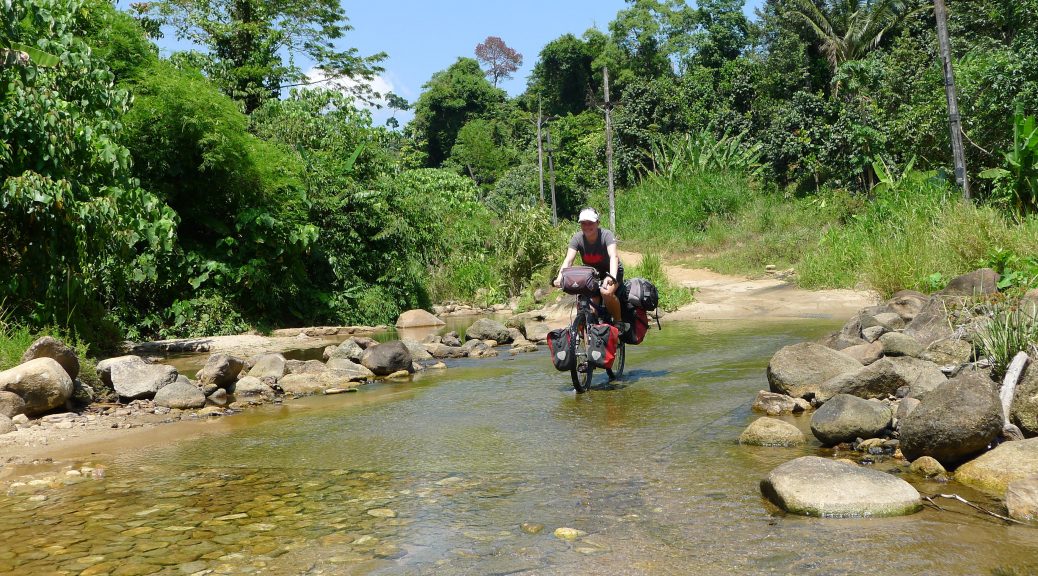 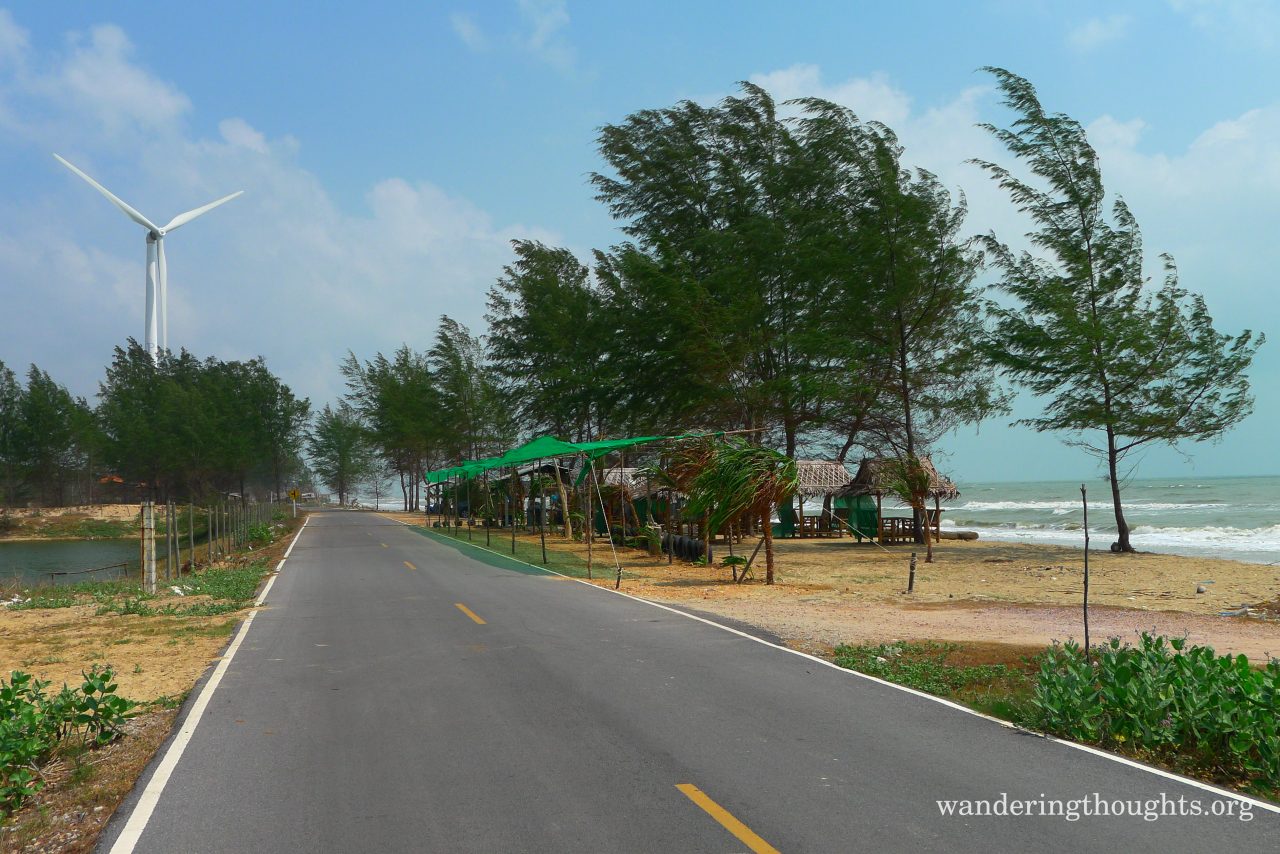 Look at the windmill – that’s where the wind is blowing to.
Look at the trees – that’s how strong it is.
Look at the distance – that’s the actual amount of traffic here.
Look to the right – there is food where the huts are.
Look at the asphalt – what more could you ask for?

So this is it I think: We have arrived in cycling paradise. I can’t think of any other way of describing it. Everything just… works. 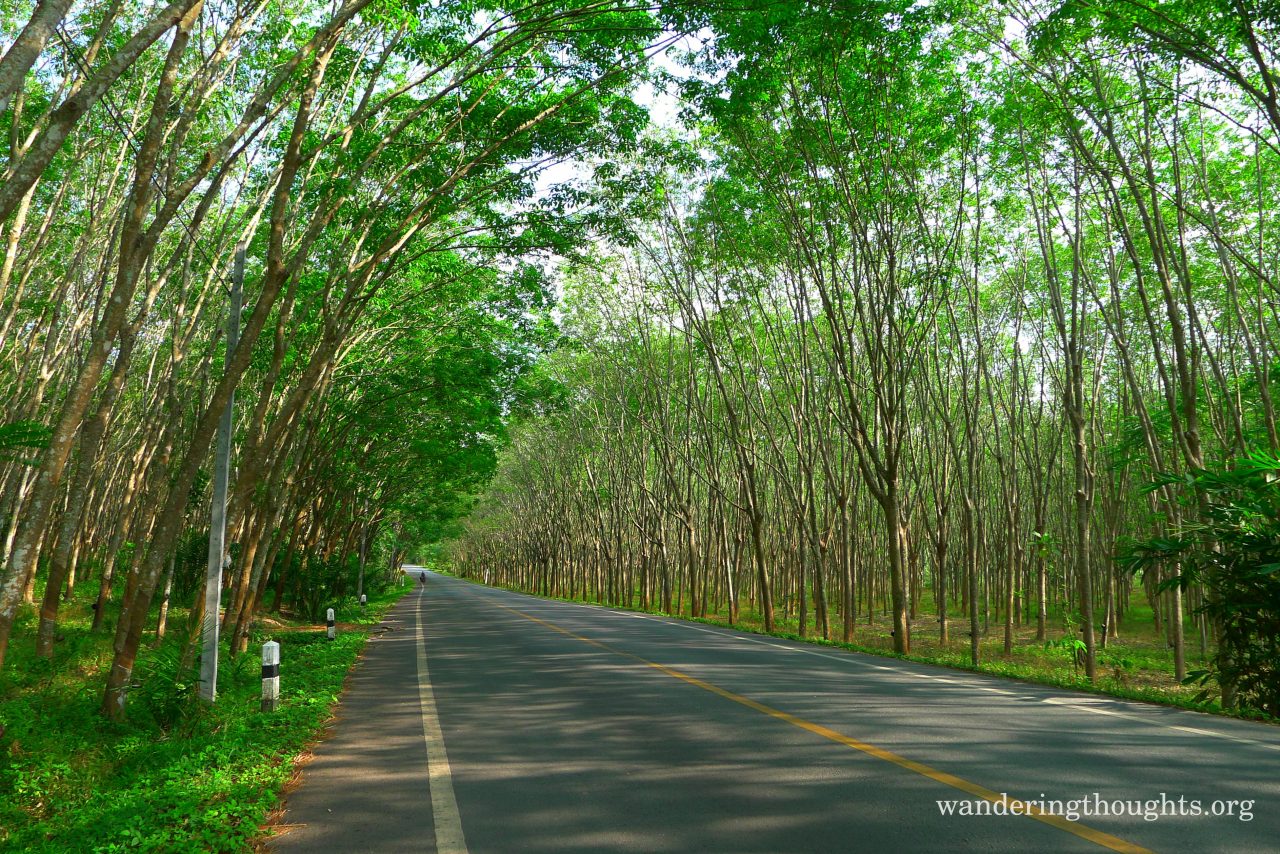 But let me explain from the beginning:

Our route and the roads

We cycled into Thailand at the Padang Besar border crossing. Not our first choice as we would have preferred the smaller one near the west coast. But with the idea of applying for a Chinese Visa in Songhkla we went east. 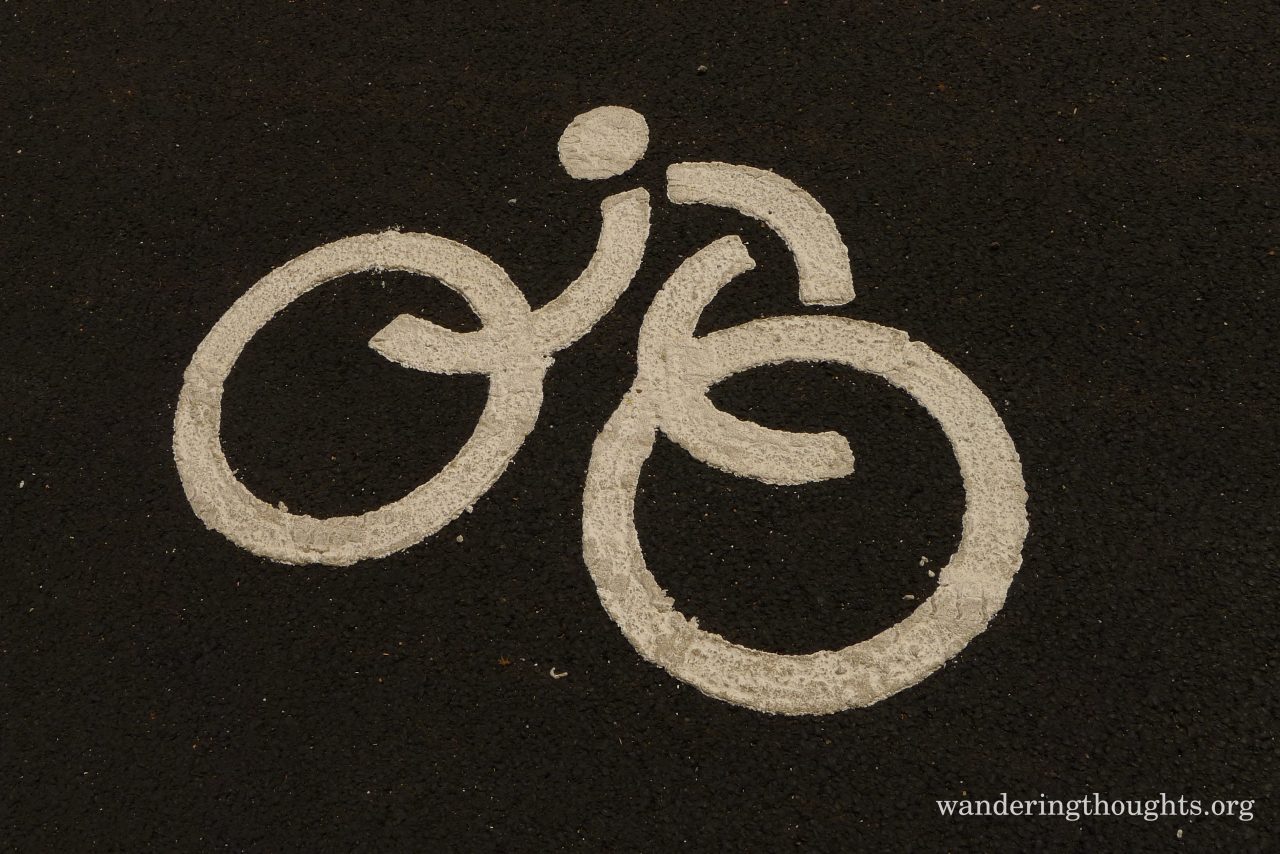 Just after the border we found ourselves cycling on an actual bicycle lane – what a novelty after the past months! And while we’ve had a few busy highways towards Hat Yai and Songhkla, there were oh so many quiet and peaceful roads afterwards. 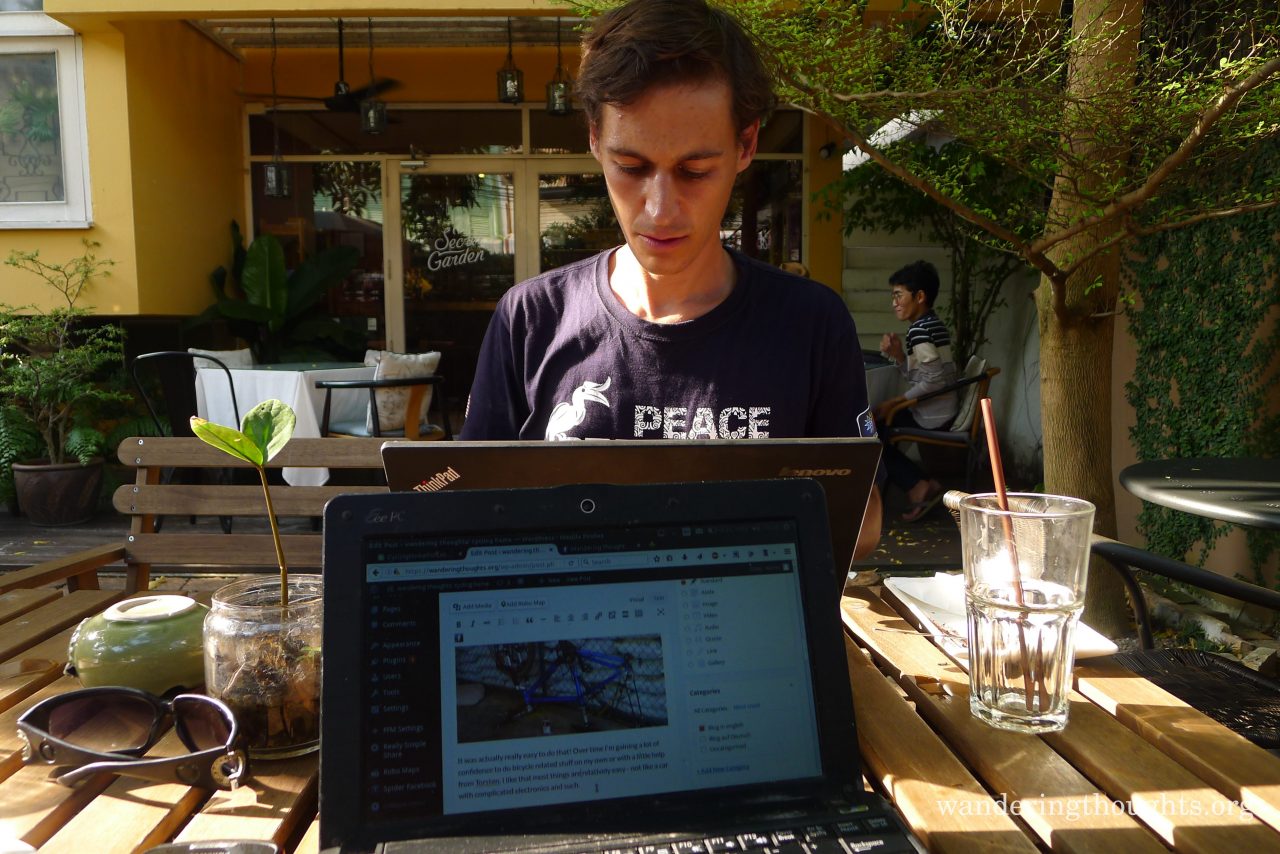 We had a nice break in Songkhla at our couchsurfing host Tom. Unfortunately our attempt to apply for the Chinese visa was not successful as non residents are supposed to apply in Bangkok now. Oh well. So we cycled northbound along quiet coastal roads with an inland stretch towards Suratthani. 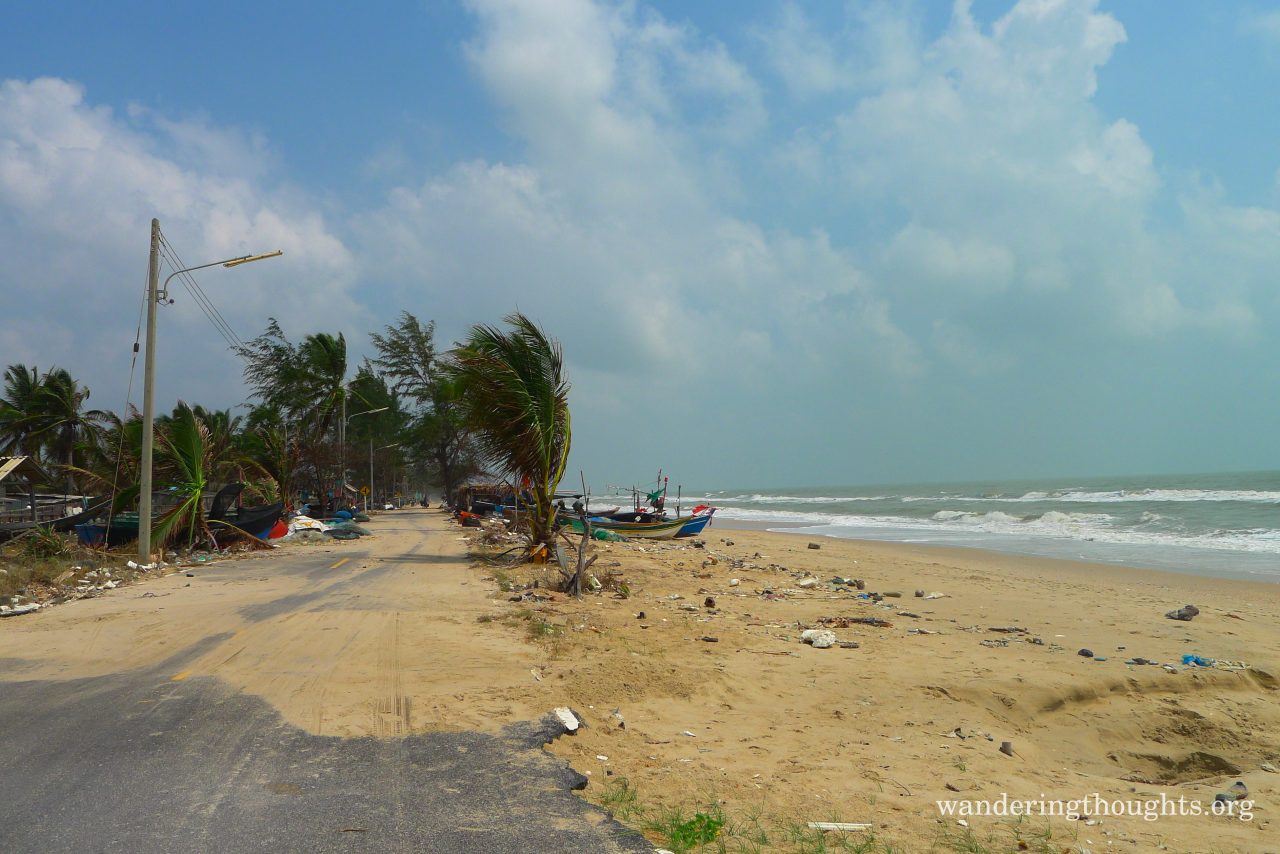 Sure, sometimes we would find some sand on the road or maybe even a tree. Or Google Maps shows bridges which are more fiction than reality. But I prefer that to cycling on a main road any day. 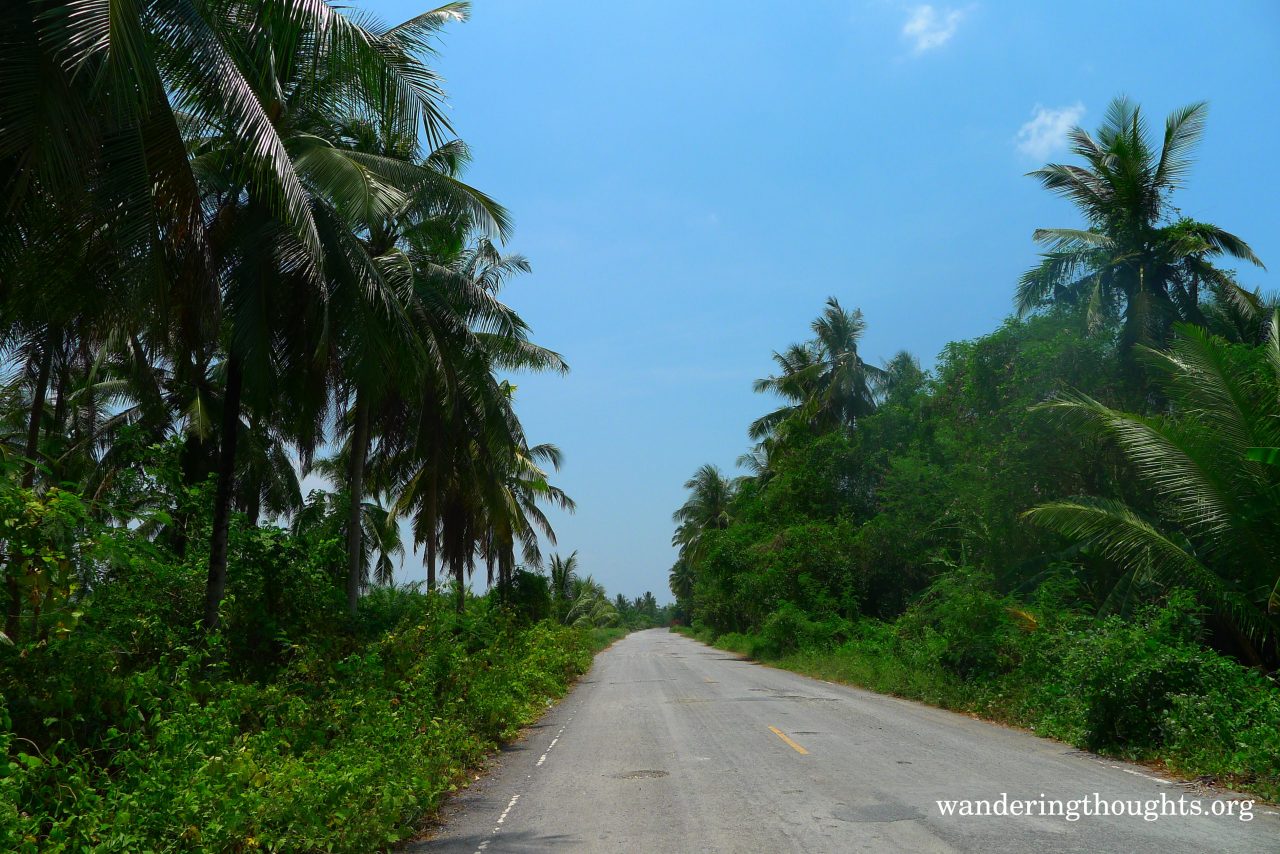 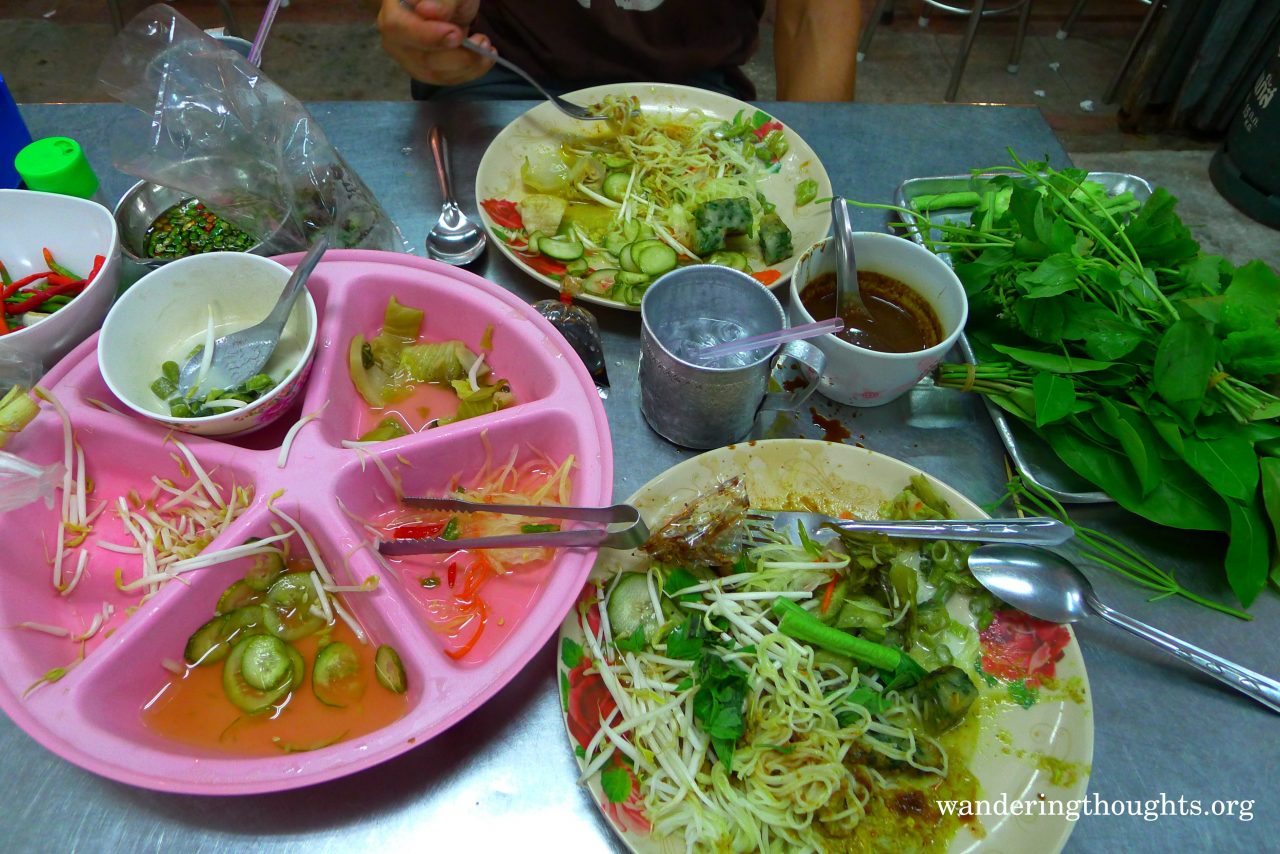 There is literally food everywhere. And I can’t rave enough about Thai food. It is oh so easy to find street stalls which prepare food freshly and with an array of herbs and sauces. What I especially liked was the amount of vegetables used! Also almost every eatery however small offers free drinking water. We often used that to top up our bottles (after asking of course!). 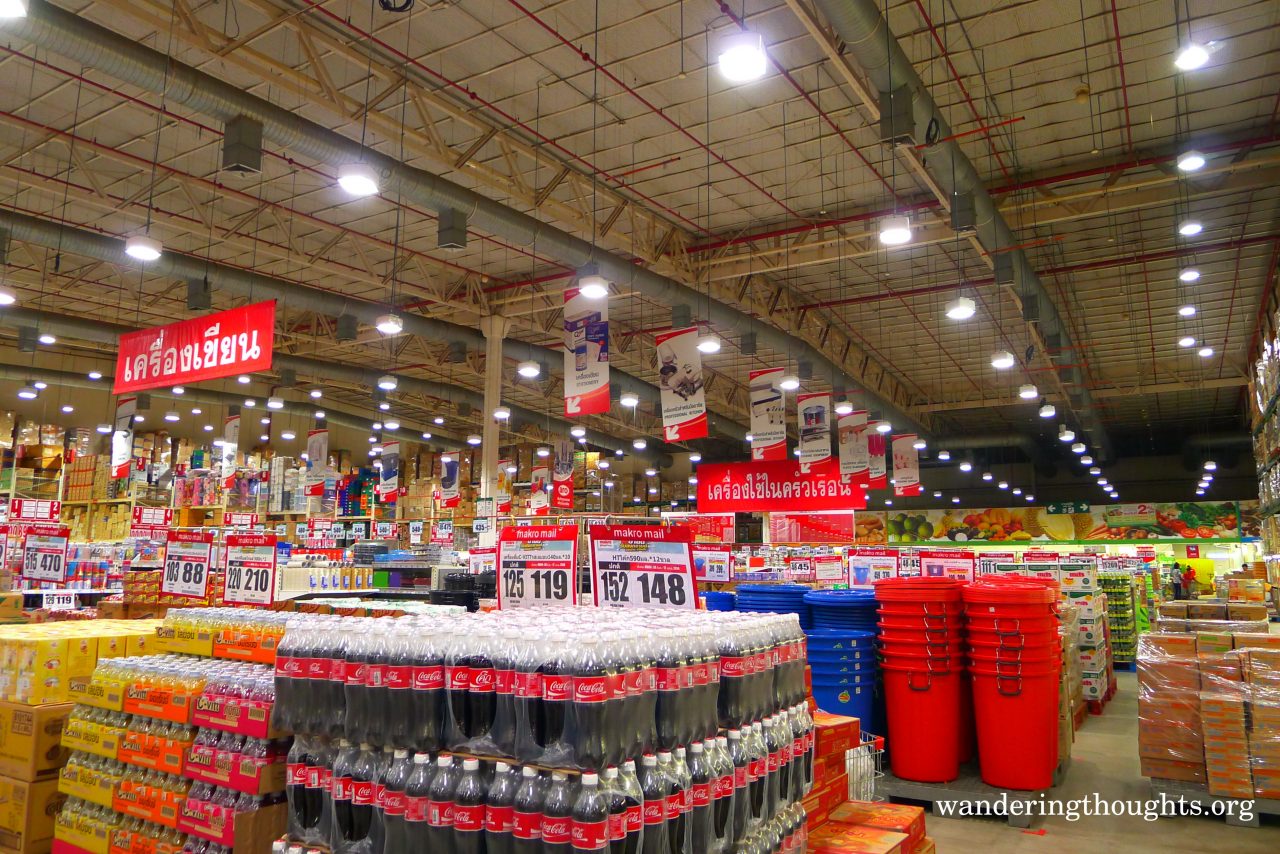 For an added bonus, there are also big supermarkets. Usually we prefer buying fruits and vegetables in markets but sometimes supermarkets are convenient, too. They tend to have more choice and some occasional treats. Not the one in the picture above though, way too big! 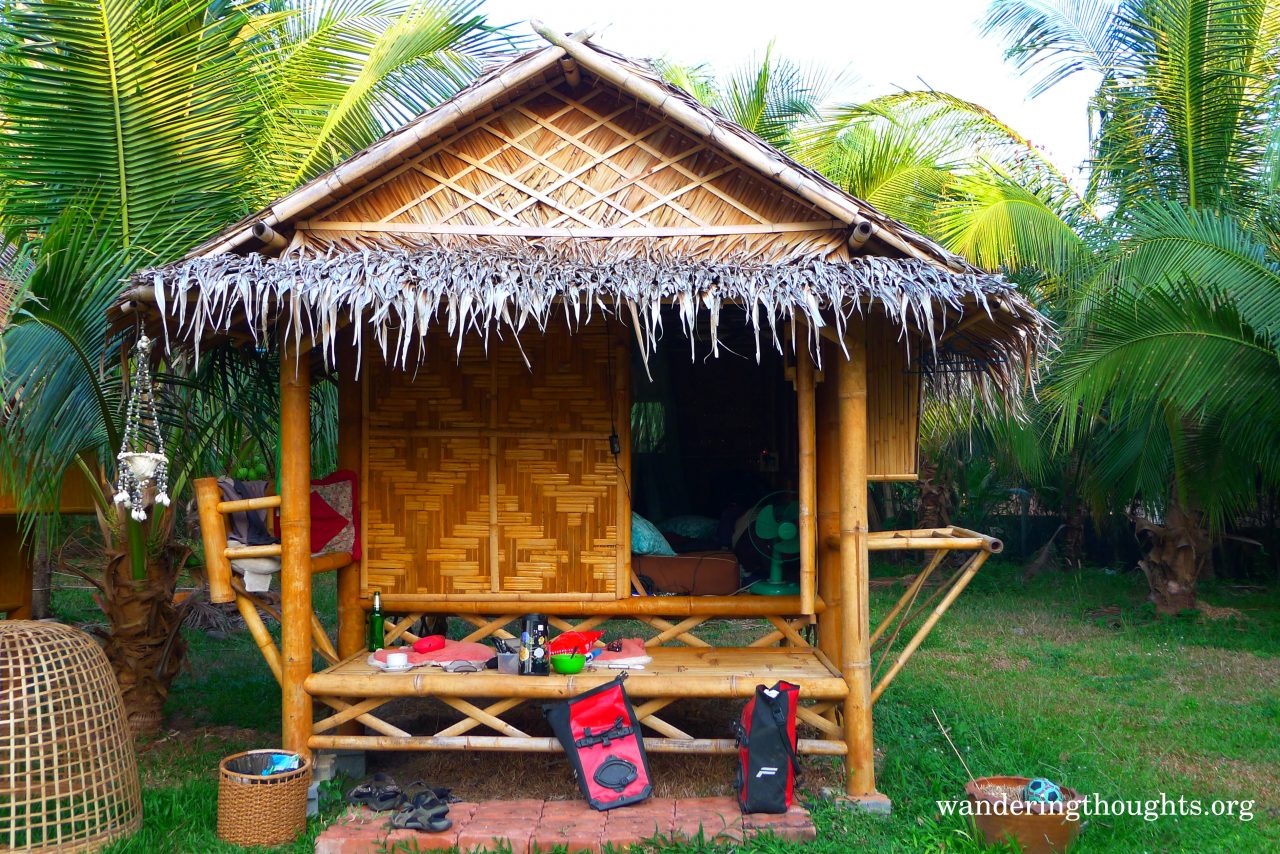 We both never plan to much where we are going to end up after a day of cycling. We usually have some ideas where to find guest houses and if that doesn’t work, camping or asking people are other options.

In southern Thailand accommodation was almost as ubiquitous as food. Sometimes we were surprised about finding places to stay in rather remote corners. And if you don’t find anything, the beach is really not a bad alternative as long as there is some wind!

A shift in attitude: On compromising

It might have been that cycle touring in Thailand is just overwhelmingly easy as for the above mentioned reasons. Or it might be that our discussion on cycling and distances and compromising was fruitful. In any case I noticed a shift in my attitude towards compromising. Torsten and I might still have different ideas on what distances we would like to cycle on some days but somehow all our talking made me realise that it’s important to compromise. That may sound mundane but is has grown more important recently. In the beginning of our trip I was far from being able to cycle the distances / dirt roads / altitudes we cycle today without it being a major event. Now I’m much more capable and even if I don’t enjoy cycling 130k for several days in a row I can do it for one or two days. And as Torsten enjoys cycling longer distances sometimes I’m fine with doing that as long as we have some easier days in between.

That may sound trivial but it’s actually quite important for us to both enjoy touring together. When cycling with someone the chances are high that you won’t always agree on everything. So our solution is now that we sometimes cycle more, sometimes less and I’m doing well with the mix. 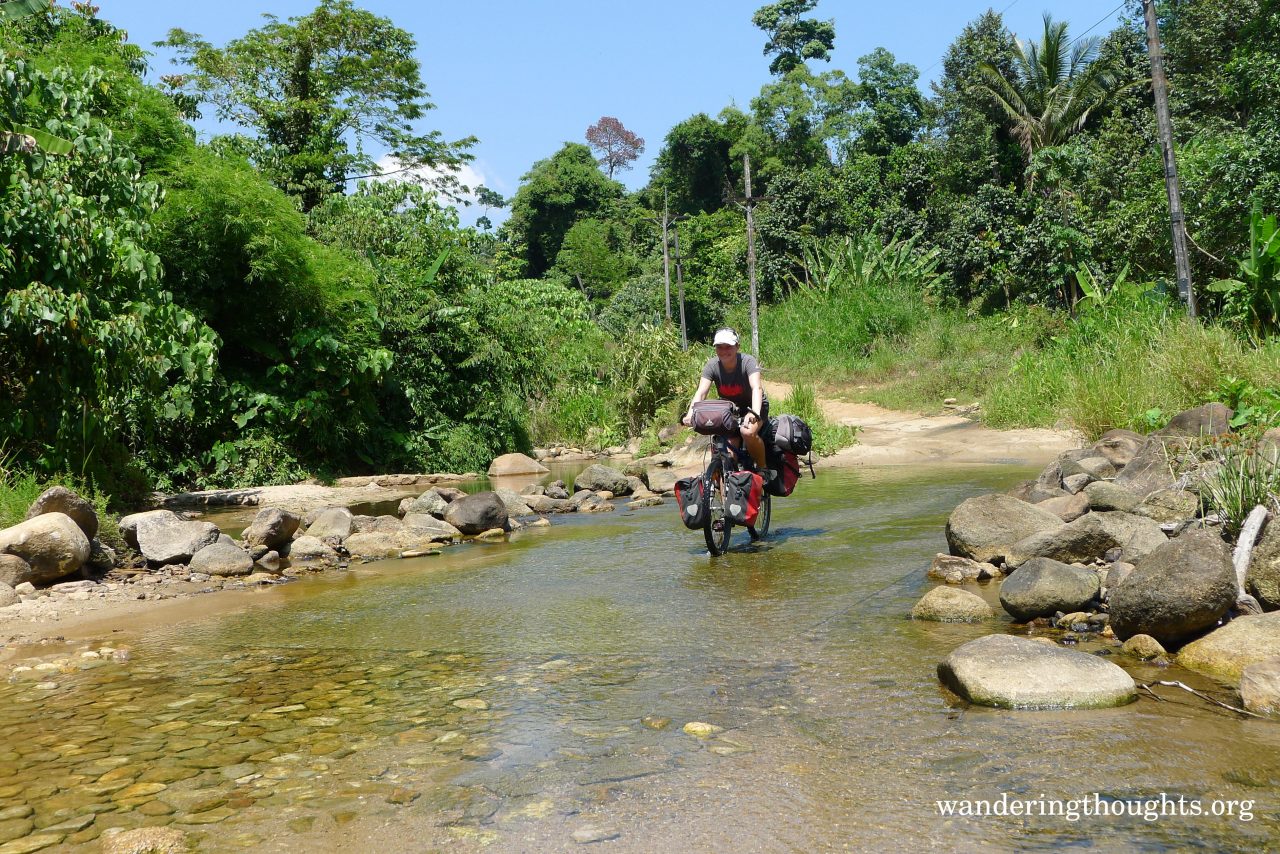 Of course the shift in attitude has a lot to do with the shift in physical abilities. Not only that I can now cycle longer distances, I am also a lot more confident on dirt roads. And we had a few challenging ones going inland to Suratthani. 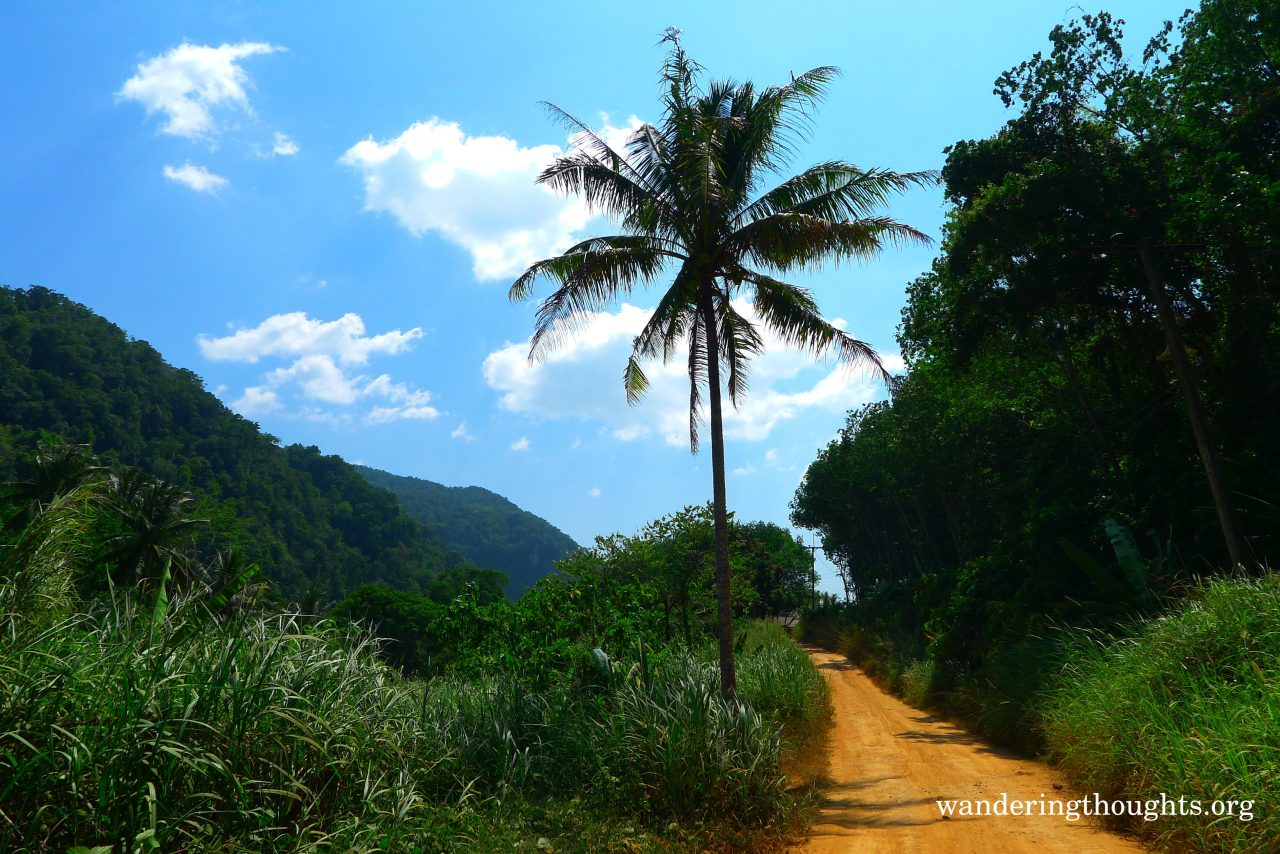 I still don’t enjoy cycling over rutted tracks on a loaded touring bike for hours but if it happens I am much better at dealing with it. And mostly I actually stay on my bicycle, even going uphill ;). 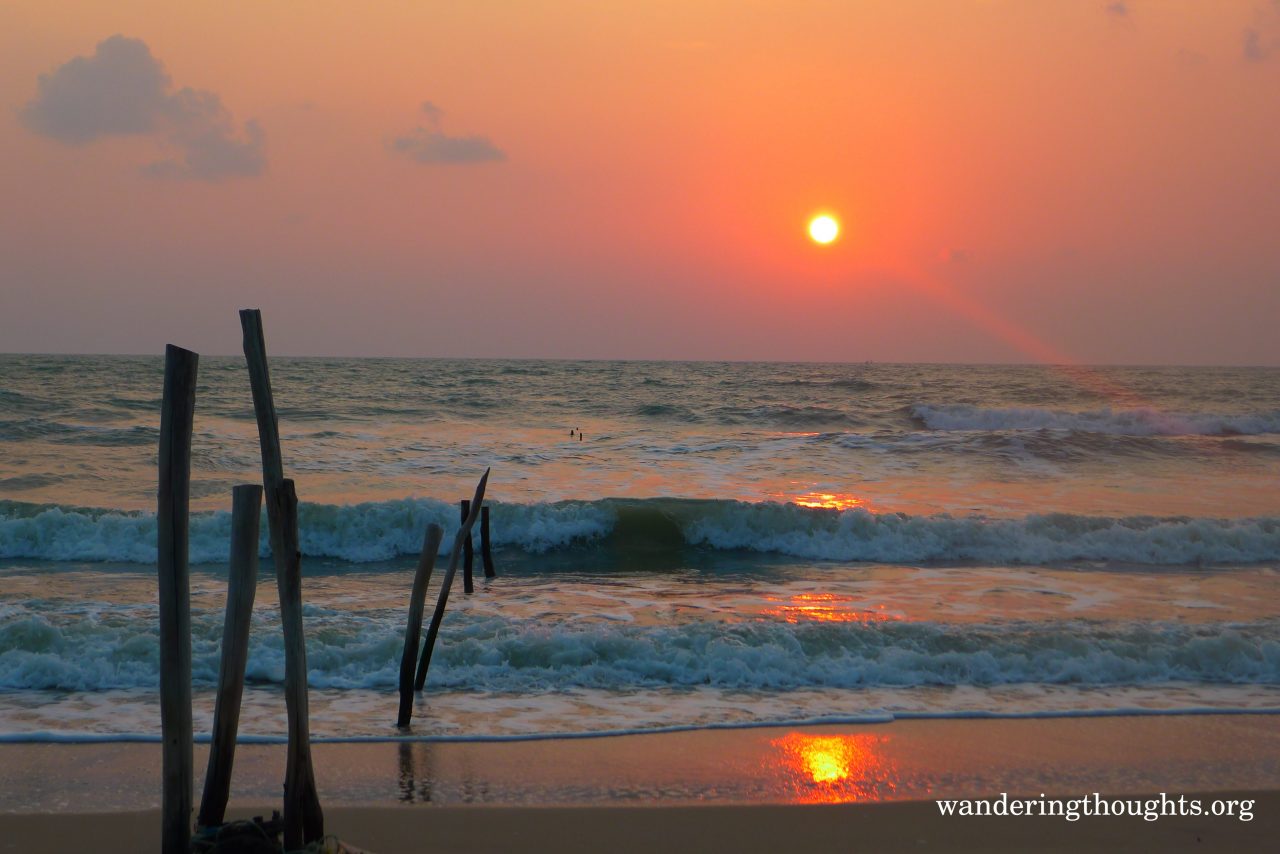 So as I said, cycling in southern Thailand really has it all: tasty food, a choice of accommodation or camping opportunities and different levels of easy or difficult cycling. Almost like a holiday!