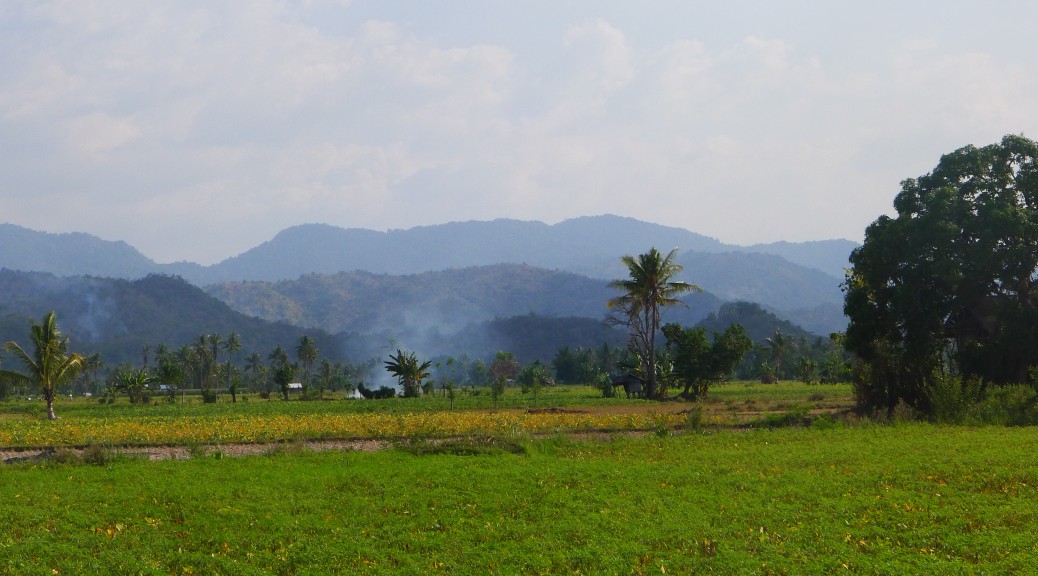 Storytelling isn’t only about how to tell a story but a lot about the stories you choose to tell. Sometimes the process of choosing is a hard one. 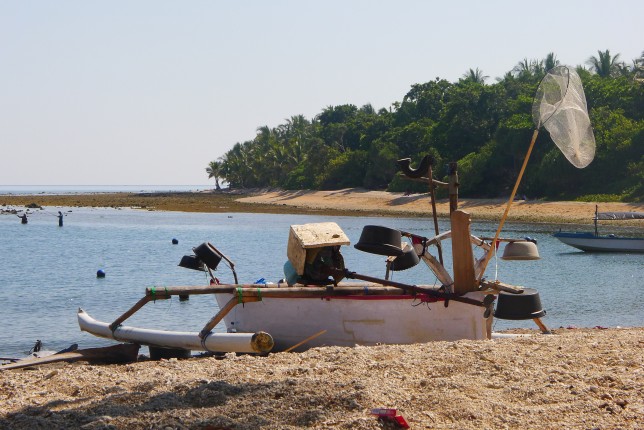 In all of Indonesia (Bali, Lombok, Sumbawa so far) we constantly met people. By ‘met’ I mean we didn’t only see them but almost everyone greeted us. Mostly with a lot of excitement, a big smile and loud shouts of “Hello Mister”. Or “Bule” which means foreigner. And by ‘constantly’ I really mean all the time, every few seconds. In that sea of encounters there are a few that touched me deeply which shall be mentioned here. Sadly we never really caught their names, it didn’t seem important at the time. And I only have permission to publish one of the pictures, so you have to make do with the stories mostly!

On the first day

As we were low on water we stopped for a coffee, wanting to ask about filling our bottles. And it was there that we had the most heart warming encounter with the shop owners. They seemed delighted to see us and especially the woman and I had an instant connection. She was in awe of me and my heavy bicycle and remarked time and again on my leg muscles. It was one of these conversations where no one really speaks the language of the other person and still there is a deep conversation going on. There was something meaningful between us and I am still on the edge of tears when I think of her. I don’t think I will ever see her again but I will be forever grateful for that encounter. For the heartfelt interest in each other, for all the hugs she gave me and for their honesty. 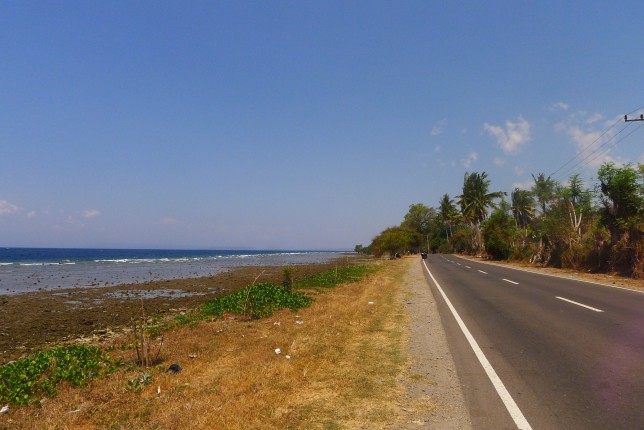 Another day we were just cycling through a village, waving and smiling at children passing by. It was long before noon and already unbearably hot. We were discussing having a break but not really sure if it was justified so soon. Just before leaving the village a man waved at us excitedly and shouted: “Come here! Come here!” We didn’t really need a lot of convincing to have that break after all. 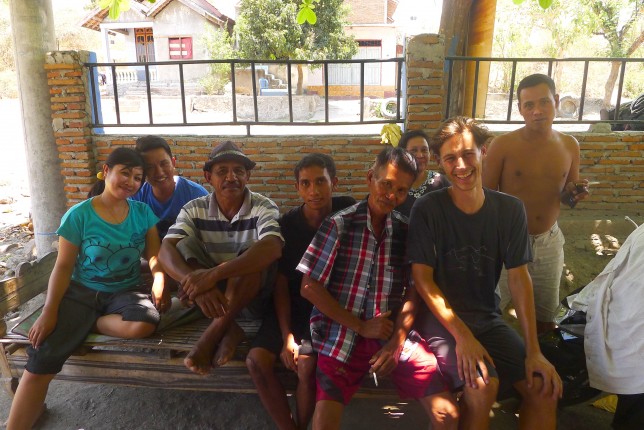 So we joined a group of about 10 people who were passing the morning chatting and relaxing next to a small food stall. We were soon offered amazing food and coffee and enjoyed our meal all the while getting to know the man who invited us. To our luck he was a retired English teacher which made conversation easy. Once again we were humbled by this encounter. The group sent out so much warmth, interest in us and our journey and simply wanted to get to know us. In the next hour we learned some more Bahasa Indonesia, were invited repeatedly to stay the night and heard stories about life in this village. If anyone still needs a reason why to travel by bicycle – remember this! These chance encounters on the side of the road are worth sweating up a lot of hills after all.

Give me something cold and I will be in heaven 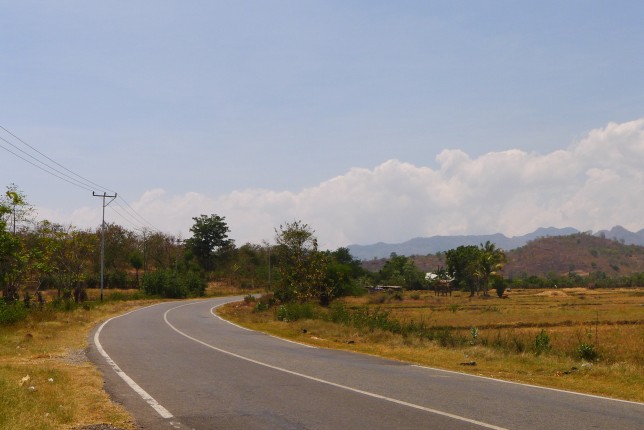 Later that week the sun was getting to me. The road was a good one, the traffic modest and the people friendly as could be. But I was once again fighting with a stomach bug which made cycling on flat ground more exhausting and cycling uphill seemingly impossible. I made use of every little piece of shade I could find (there weren’t many anyway) and we often stopped to ask for cold drinks. 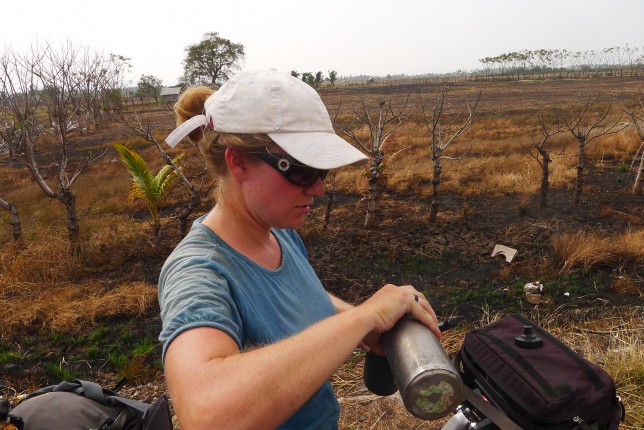 Cycling in Indonesia has been exceptionally convenient as there are almost always food stalls around or at least small kiosks that sell biscuits and drinks. So it is not likely that you will ever go hungry or thirsty. Finding something cold to drink was a bit of a bigger challenge though. People in rural Sumbawa don’t usually have a fridge and rely on ice deliveries to make cold drinks. And ice doesn’t get delivered everywhere. 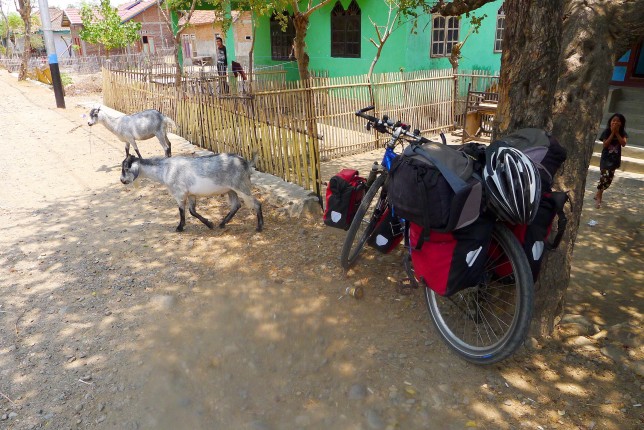 So when I spotted some ingredients to make Es Campur (Indonesian dish which mixes crushed ice and all sorts of ingredients like jelly, corn, condensed milk, fruit) on a table I turned around and begged Torsten to stop with me. We wheeled our bikes into a garden and looked around for the owners. A woman soon showed up, was visibly surprised about two foreigners turning up in her garden and invited us warmly to sit down and rest. She and her husband were amazing and we proceeded to have a conversation about our trip and about their lives in a mix of our broken Indonesian, a little English and with a lot of help of our dictionary. The couple originally came from Yogyakarta on Java and moved to Sumbawa to be near her parents. They do miss the culture and the people of Java quite a bit though and find it hard to cope with the quiet life in rural Sumbawa. On leaving we weren’t allowed to pay for anything and when I hinted at my stomach problems she whisked me into her house and gave me something to rub on my belly. I am so very grateful for the glimpse into their life and for their generosity with which they received us. Once again we were given a lot more than we needed. 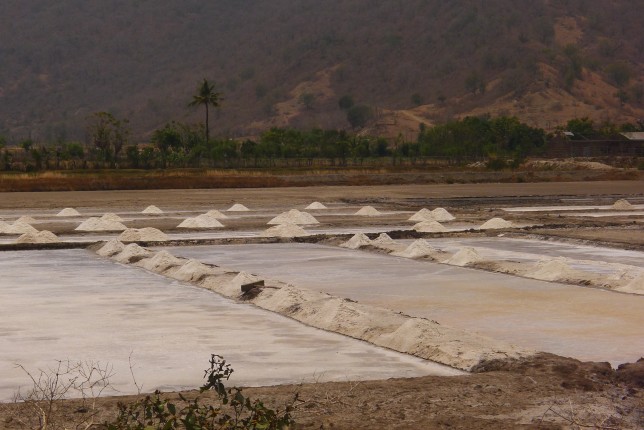 Unfortunately – of course – this post doesn’t even come close to summing up all the beautiful encounters we had on Sumbawa. Not to mention the water buffalos, the salt fields or mountains that we saw. But it might give you a small glimpse into our time on Sumbawa and that’s really all a 1000 words can do!