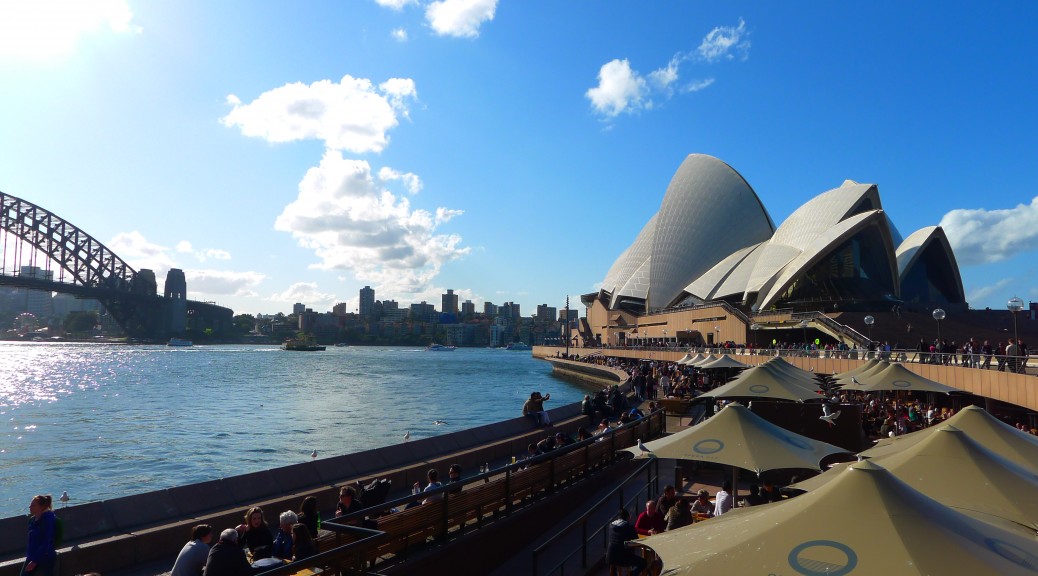 So after all our planning we are finally here! Our plane landed safely in Sydney and after rebuilding our bikes and reorganizing our luggage at the airport for only about two hours we cycled towards the house of our first warmshowers host. Eleri kindly invited us to stay with her for a week or so while we would organize our gear and wait for a package from Germany containing Torsten’s panniers and more.
Handling the mountain bike which I’ve had for half my life but was now loaded with back and front panniers and a backpack felt more than a bit wobbly in the beginning. But after a bit I managed to cycle the 8 k or so to our destination for the day quite well.

Eleri wasn’t at home when we arrived and had told as how to get into her house. So we made ourselves at home which was a bit strange with her not being there! But we met her a little while later and talked a bit before going to sleep into our wonderful bedroom with attached bathroom. That may be a luxury we’re not going to have again for quite some time!

The next days were spent exploring Sydney and organizing things for our tour. So we did end up at the opera house at some point, perused several bike stores for racks, spokes and more and went to a nice weekend market and a gallery. Luckily an artist, I had heard about a few years ago, was in town and offered a free exhibit: So on Sunday we went to the Marina Abramovich In Residence Exhibition. With noise reducing headphones we took part in an interactive body art installation which was an intense experience and I’m glad for the coincidence of her being in Sydney when we were there!

We also  talked to some people at the Redfern Tent Embassy which is an ongoing demonstration about a large building project in the middle of Sydney which neglects Aboriginal rights on that particular piece of land. It was interesting how that is still an issue today (somehow I thought that was all in the past but then again when is that ever the case with colonisation?).

So Sydney offered lots of interesting places to go and things to see, but I was antsy to get going. Unfortunately there was still no sign of our package after the first week so we decided to stay even longer. We managed to get up really early and accompany Eleri on a Saturday morning training ride to Centennial Park on which I found out that I’m quite slow but what are you gonna do with an elderly mountain bike between all the fancy racing bikes? It was fun nonetheless and I really enjoyed the coffee and almond pastry afterwards.

Two weeks later there was still no sign of our package so we finally decided to get going anyway. Our visa for Australia was only for three months and we didn’t want to spend any more time waiting. So on a Saturday morning we said good bye to Matt and Hannah, our second hosts in Sydney and finally – off we went! More on that later…!